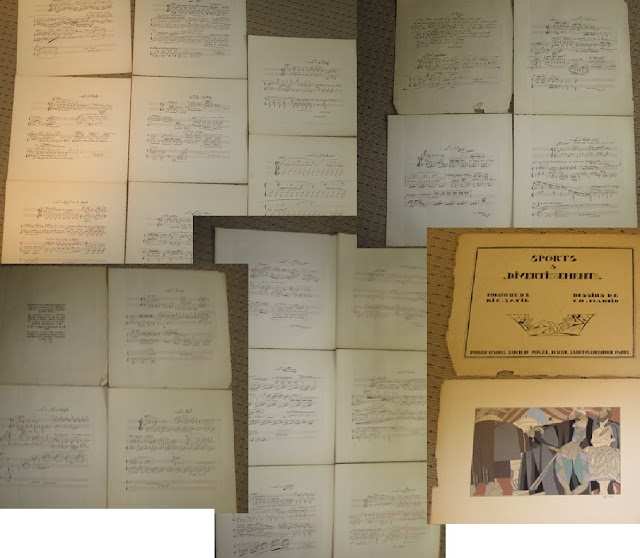 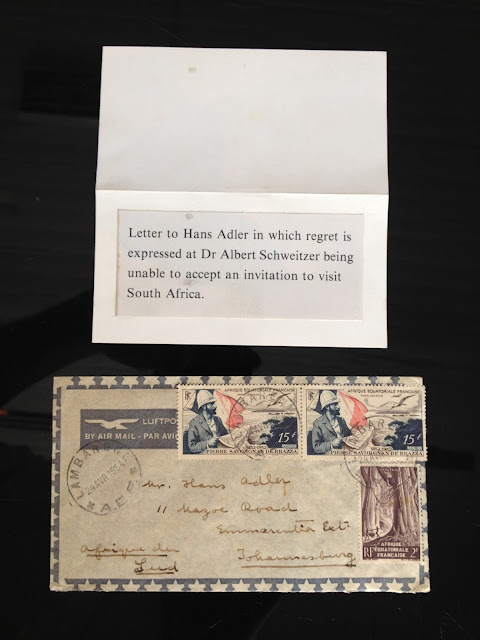 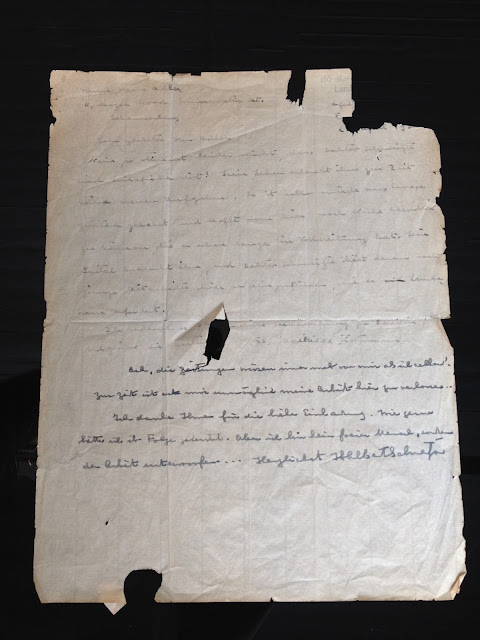 Dr Albert Schweitzer, Musician, Nobel Laureate, Physician and Philanthropist.  Gained prominence in his early life as a music scholar and organist.  Spent most of his life as a Medical Missionary in French Equatorial Africa, where he opened a noted Hospital and Clinic.  Received the Nobel Peace Prize in 1952. 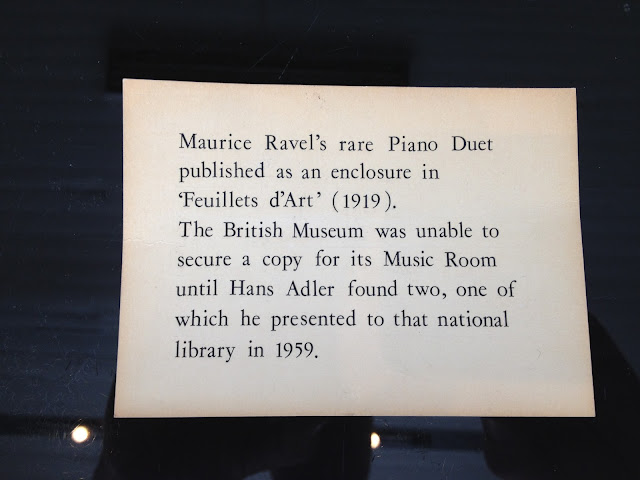 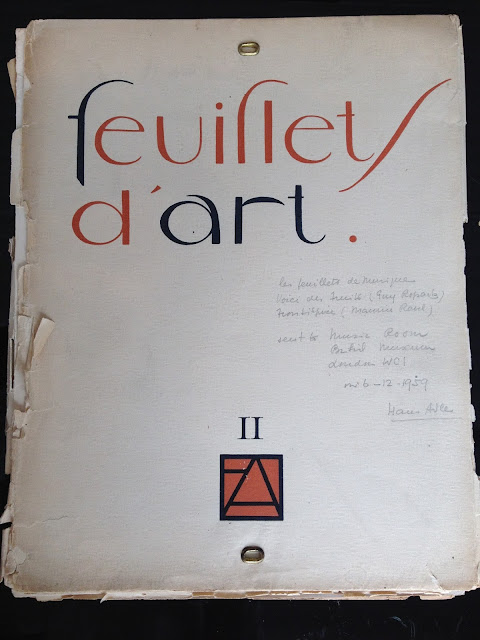 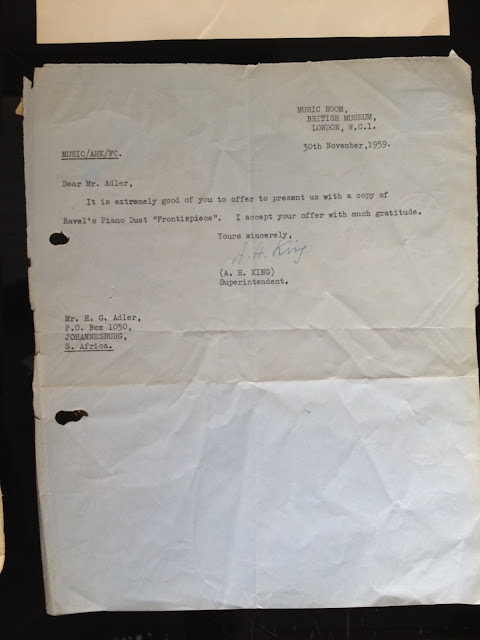 Maurice Ravel, who needed money, engaged this Paris Fashion Magazine in 1919 to publish “Frontispice”.  As Durand & Fils owned sole publishing rights, they took legal action and stopped distribution of the magazine.  The copies already printed had to be destroyed, in terms of the Court Order.
Even Vlado Perlemuter, Ravel’s only surviving pupil, was surprised to hear that such a rare piece of music existed. 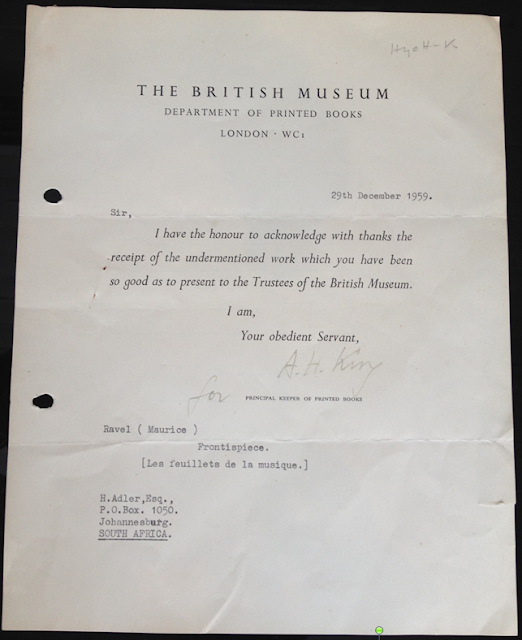 The British Museum, acknowledging receipt of the gift of the Magazine and Ravel’s “Frontispice”, copy of which they had been unable to obtain. 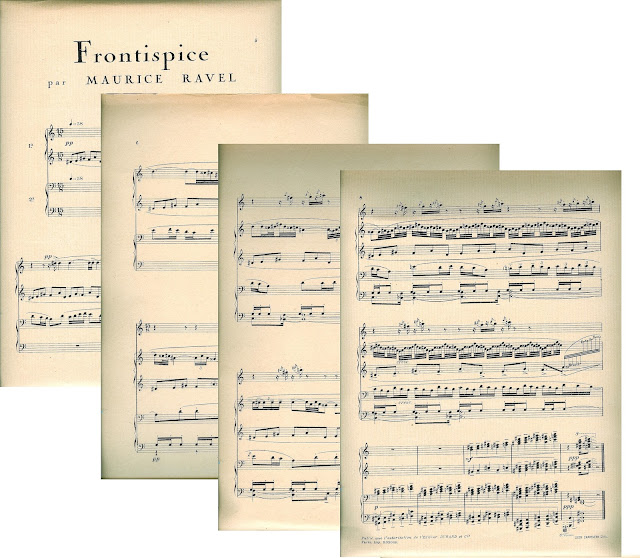 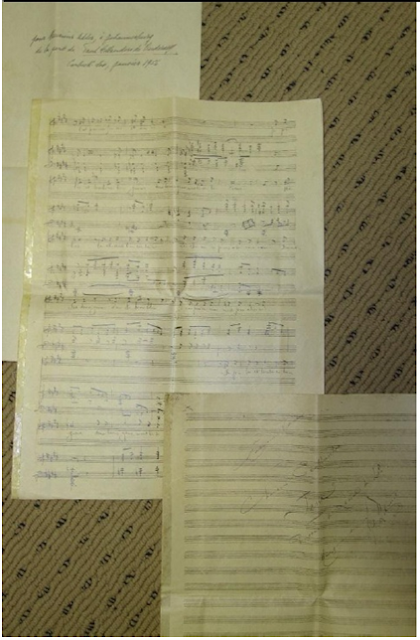 Facsimile of Debussy’s approx. 1882 composition of “Jane” conveyed to HA on behalf of Paul Hollanders de Ouderaen (who helped in the biography of Anna Magdalena Bach, JS’s second wife).  Madam Paul Hollanders owned a number of manuscripts and facsimiles of Debussy works, including this original manuscript.
Of special interest is the fact that this was donated in 1956, and “Jane” seems to have been first published in the 1960s 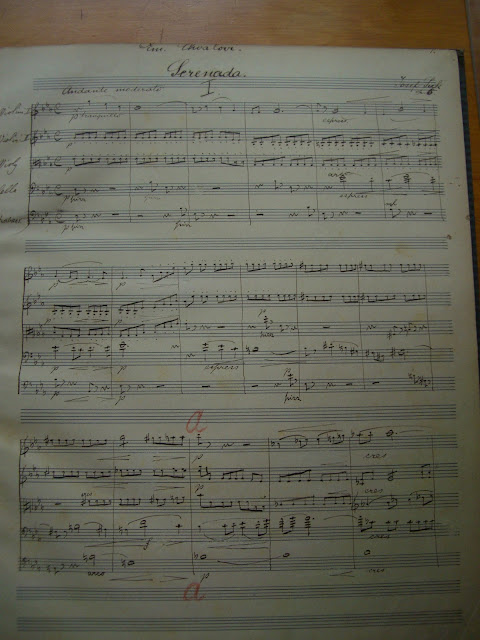 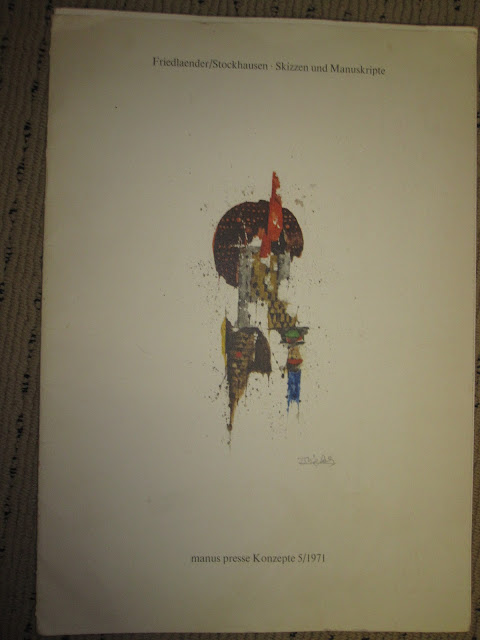 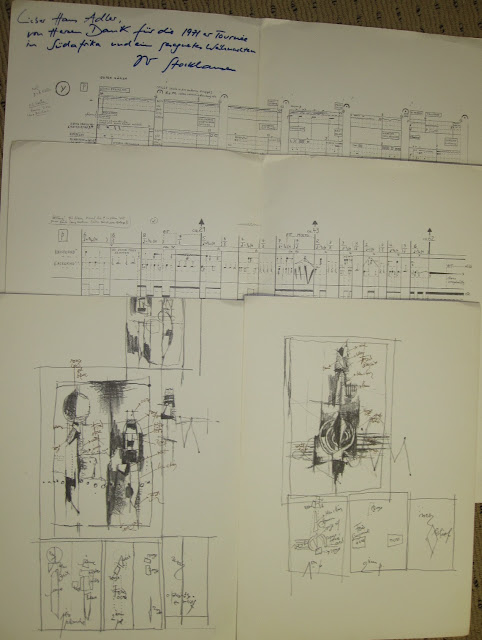 Signed copy of the limited edition of 1000 printings of Karlheinz Stockhausen’s “Skizzen und Manuskripte” with some annotations and editing in French, perhaps by an orchestra member.
Dedicated to HA during the composer’s invitation to perform on a promotional tour of South Africa in 1971. 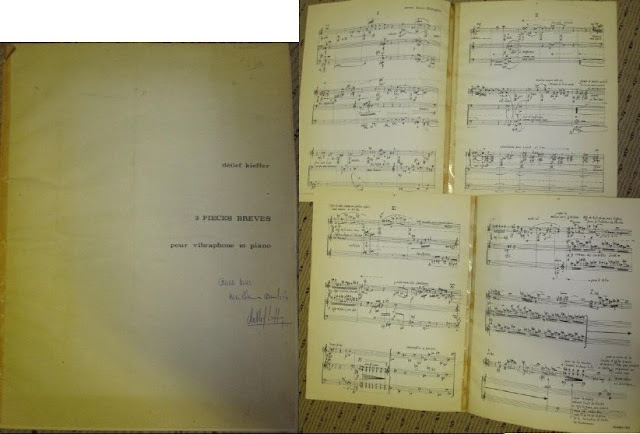 Facsimile of the score of “3 Pieces Breves pour vibraphone et piano” dedicated to HA by Detleff Kieffer, possibly from his own publishing of the composition, dated December 1963.  Mr Kieffer toured Southern Africa in 1971 with ‘Les Percussions des  Strasbourg’. 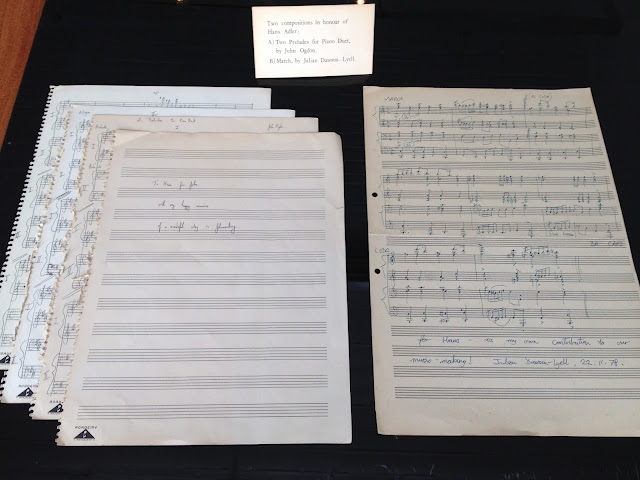 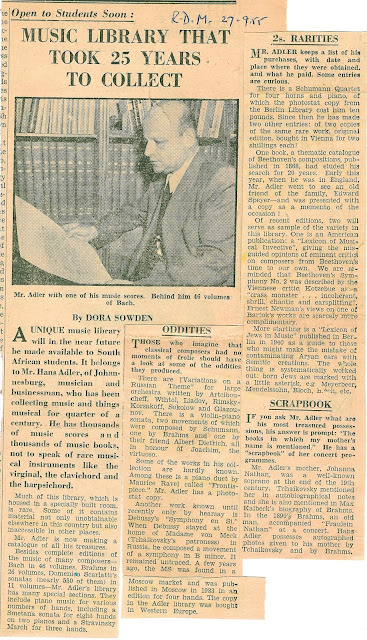 …..A Special section in the library, like Piano music for various number of hands, …. Smetana Sonata for 8 hands on 2 pianos and Stravinsky March for 3 hands.  Oddities like “Variations on a Russian Theme for large Orchestra”, written by Artciboucheff, Wihtol, Liadov, Rimsky-Korsakoff, Sokolow & Glazonov …..a violin piano sonata with 2 movements composed by Schumann, 1 by Brahms & 1 by Albert Dietrich in honour of Joachim…. A piano duet Maurice Ravel called Frontispice… A copy of Debussy’s “Symphony en Si” a movement of a symphony in B minor composed when he stayed with Madame von Meck (Tchaikovsky’s patroness) in Russia. It disappeared and remained untraced.  In 1933 the MS was found in a Moscow market and published in a 4 hands edition….  Rarities: like his copies of a Schumann quartet for 4 horns and piano….  Finally  a thematic catalogue of Beethoven compositions, which had eluded him for years…..  An American Lexicon of Musical Invective, giving misguided opinions of eminent critics on composers from Beethoven’s time on.  Beethoven’s symphony #2 was described by Kotzebue as crass monster..incoherent shrill chaotic and earsplitting. Newman’s views on one of Bartok’s works are scarcely more complimentary.     A Lexicon of Jews in Music, published in Berlin (1940) to avoid contaminating Aryan ears with Semitic creations.  The whole thing is systematically worked out:  born Jews are marked with an asterisk, e.g. Meyerbeer, Mendelsohn, Bloch etc. (Rand Daily Mail, Johannesburg) 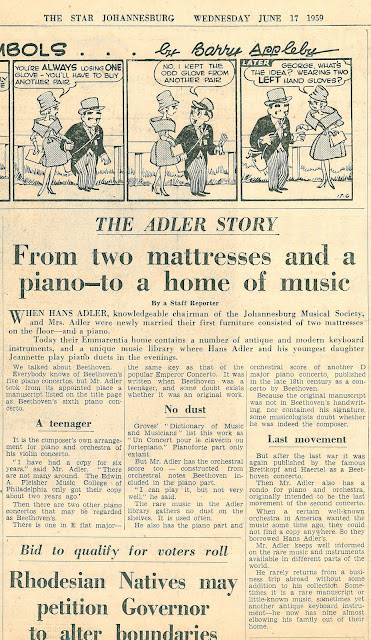 Everyone knows Beethoven wrote 5 piano concertos.  H A took down a manuscript with Beethoven’s 6th piano concerto, that he’d owned for about 6 years.  It is the composer’s own arrangement for piano and orchestra of his violin concerto. Two other piano concertos may also be regarded as Beethoven’s.  One in E flat major, written when he was a teenager, and some doubt it was an original work.  Grove’s Dictionary of Musicians lists the work as “Un Concert pour le clavecin ou fortepiano. Piano part only extant”.   But H A has the orchestral score too – constructed from orchestral notes Beethoven included in the piano part.  He also has the piano part and orchestral score of another D major piano concerto published in the late 18th century as a concerto by Beethoven.  Because the original manuscript was not in his handwriting, nor contained his signature, some musicologists doubt its authenticity.   After the war, Breitkopf & Haertel published it as a Beethoven concerto.   H A also has a rondo for piano and orchestra, originally intended to be the last movement for Concerto #2.  A well-known American Orchestra could not find a copy anywhere, so they were able to borrow his copy.   (The Star, Johannesburg)

Jean-Pierre Rampal and accompanist Robert Veyron-Lacroix are always searching for flute music whenever they tour, and have found some in obscure little libraries all over the world.  In HA’s library they discovered a first edition of flute music by Clementi, an 18th Century composer.  (The Star, Johannesburg) 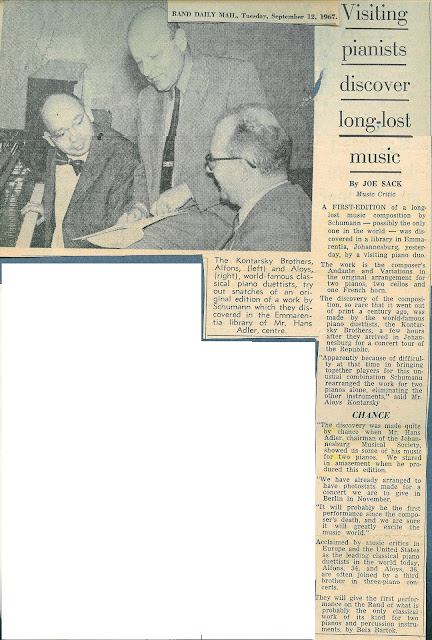 A first edition discovered quite by chance by the Kontarsky Brothers in H A’s Music Library.  A long lost Schumann Andante & Variations in its original arrangement for two pianos, two cellos and a French horn.  This went out of print a century ago.  Because of the difficulty of getting such players together, Schumann rearranged the work for two pianos alone.  (S.A. Digest, Rand Daily Mail) 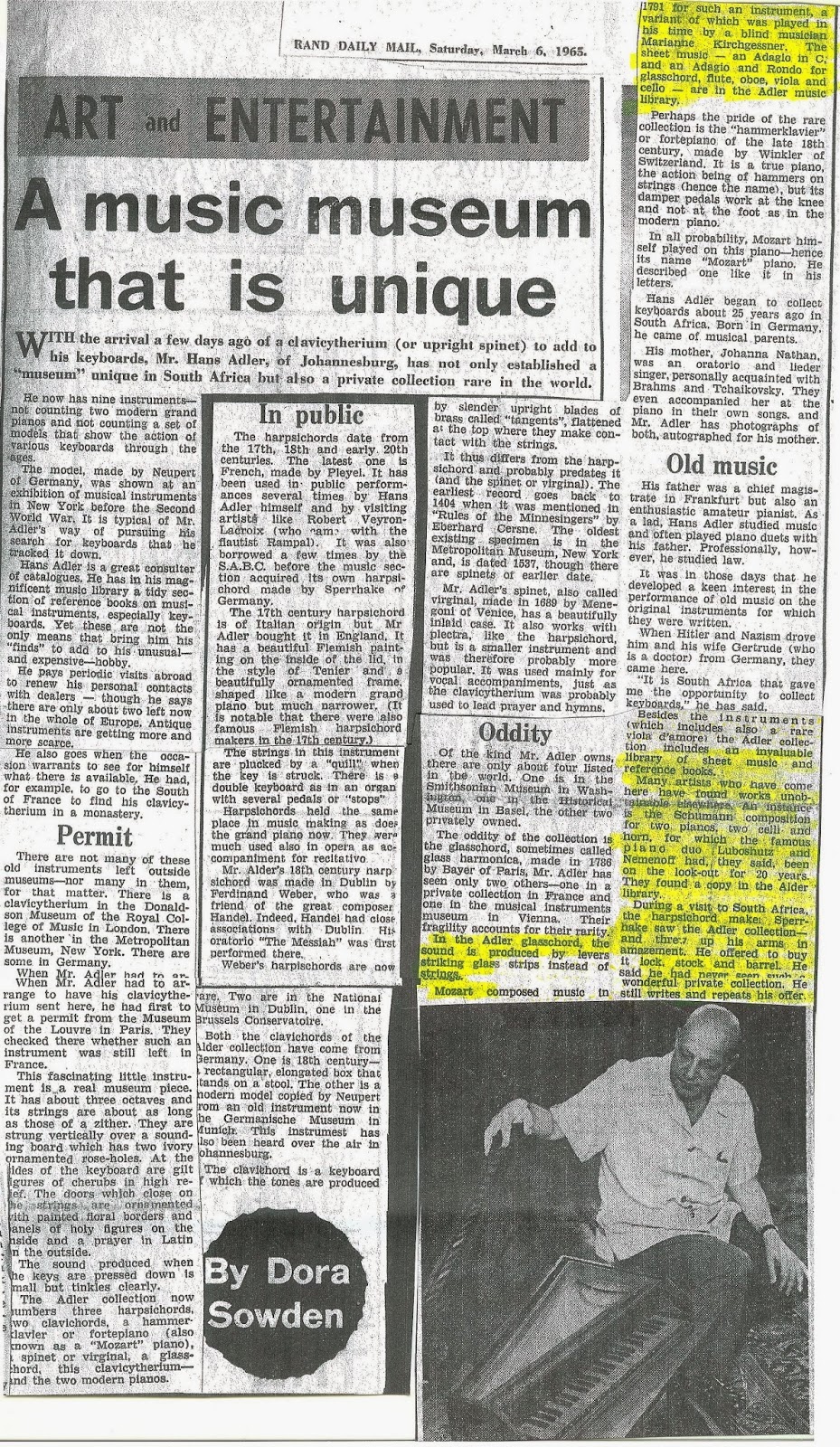 In 1791, Mozart composed a piece for the Glasschord, played by the blind musician, Marianne Kirschgessner.  This sheet music (for glasschord, flute, oboe, viola and cello) are in the HA library.
And the Schumann composition, (two pianos two celli and horn) for which the the renowned piano duo, Lubochutz and Nemenoff had been looking out for, for about 20 years, was found in HA's library.
The Harpsichord maker Sperrhake was amazed to see the harpsichord collection during a visit to South Africa at this time, and tried to buy it lock, stock and barrel. 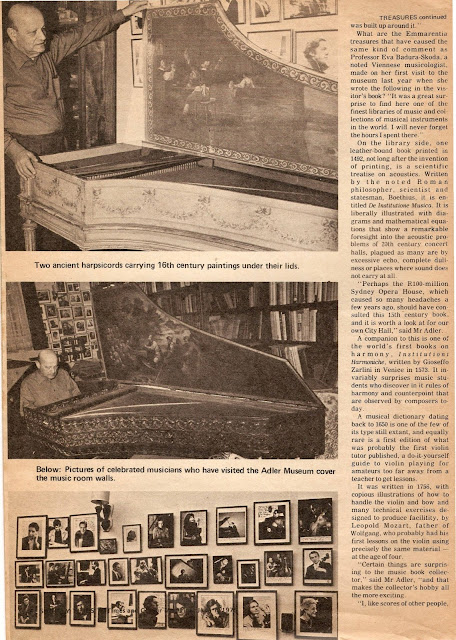 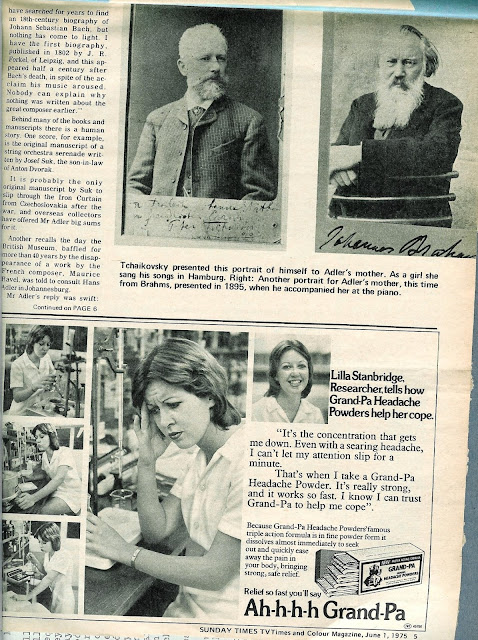 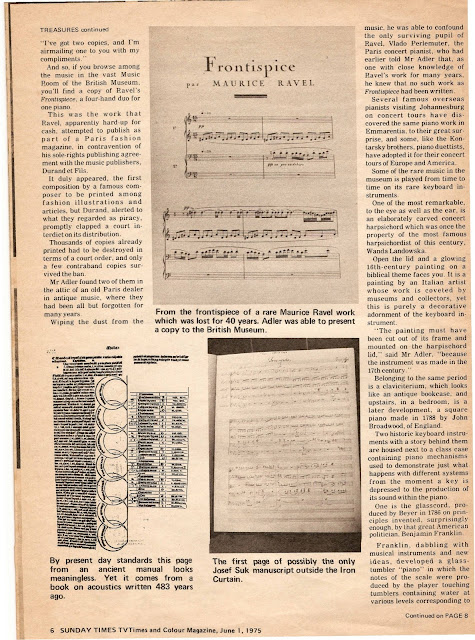 Eva Badura-Shoda’s remarks……… and HA’s continues searching for an 18th Century biography of JS Bach. He has the 1802 biography by JR Forkel, published a half century after Bach’s death but many think there must be an earlier issue. His Library has an original manuscript of Joseph Suk’s (Dvorak’s son-in-law) String Orchestra Serenade, probably the only one to slip through the Iron Curtain from Czechoslovakia, and keeps turning down good offers…… Remarks on Ravel’s Frontispice, and how all copies were to be destroyed due to copyright infringe-ments.  Even Vlado Perlemuter, Ravel’s Concert pupil, who thought he had close knowledge of his teacher’s work, was unaware that this piece had been written. (Sunday Times, Johannesburg) 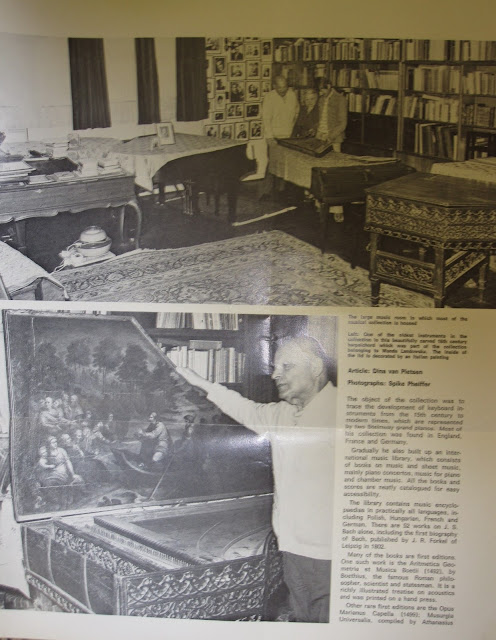 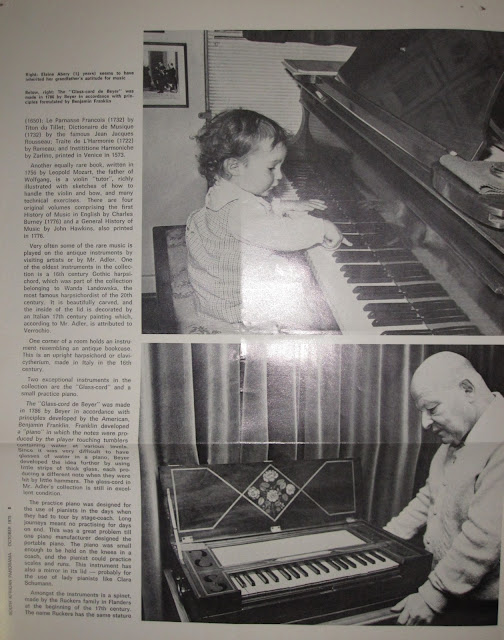 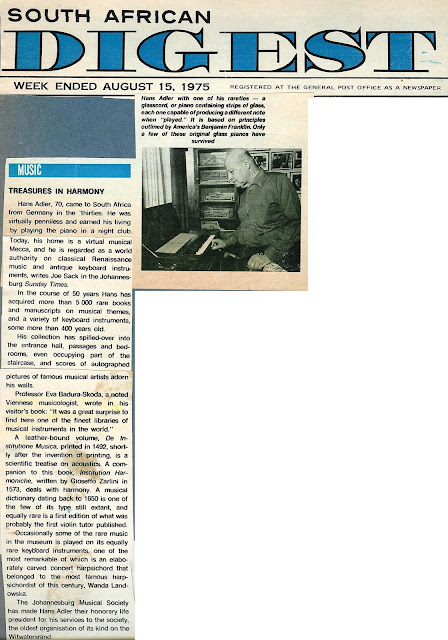 Professor Eva Badura-Skoda, a noted Viennese musicologist writes:…. “It was a great surprise to find here one of the finest libraries of musical instruments in the world.”  De Institutione Musica printed in 1492, shortly after the invention of printing is a scientific treatise on accoustics.  Institution Harmoniche by Gioseffo Zarlini (1573) deals with harmony.  A musical dictionary from 1650 is one of the few of its type still extant, and possibly equally rare is probably the first violin tutor published (Leopold Mozart – Violin Schule).   Occasionally some of the rare music is played on equally rare keyboard instruments, one of the most remarkable being the elaborately carved harpsichord of the world famous harpsichordist, Wanda Landowska.

Alexander Borodin, great composer and medical innovator, a professor of medicine and chemistry, who founded the world’s first school of medicine for women. A well known Pharmaceutical Company sponsored ‘Linking Medicine and Music’.   A recording of an almost forgotten Borodin Piano Quintet created worldwide interest in this lesser known works. The music has long been out of print.  A piano quintet score  was discovered in the  HA  library, and Walter Klien , one of a number of artists interested in the music, and touring South Africa at the time, was presented with a copy.  (Rand Daily Mail, Jewish Herald, Johannesburg) 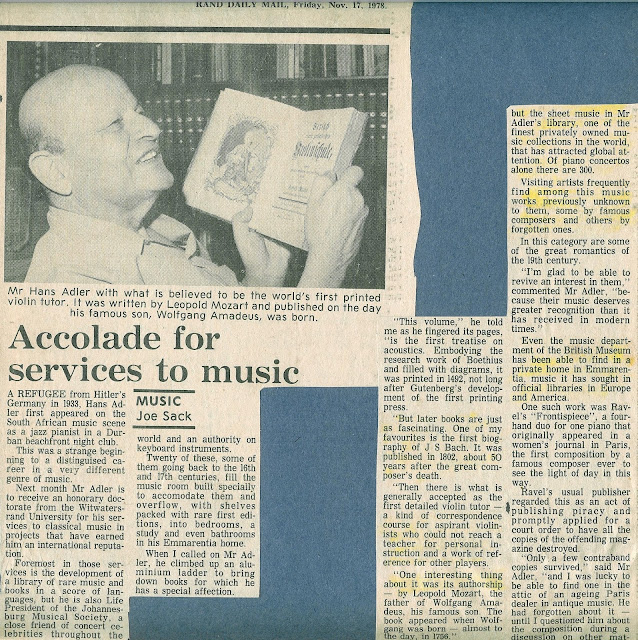 Books on Boethius’ treatise, the Bach Biography of 1802, Leopold Mozart’s Violin tutor, published the year Wolfgang was born, the Ravel “Frontispice” and the gift to the British Museum. One of the finest privately owned sheet music collections in the world, attracting global attention. Of piano concertos alone there are 300. Visiting artists frequently find among this music, works previously unknown to them, some by famous composers and others by forgotten ones. (Rand Daily Mail, Johannesburg)
Posted by Eldercrock